Celia Cruz was a performer of many genres of Afro-Caribbean music. 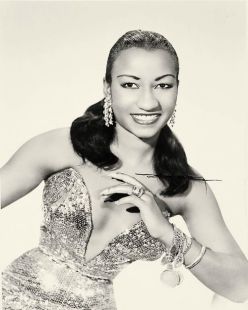 Celia Cruz was a Cuban singer, who was known as one of the most popular salsa performers of all times, recording 23 gold albums. Cruz was born,Celia Caridad Cruz Alfonso on October 21, 1925, in Havana, Cuba. She grew up in a poor city, where the greatest influence came from Cuba’s diverse musical climate. In the 1940’s, she won a “La hora del te” (“Tea Time”) singing contest, which was the start of her singing career. While her mom encouraged her to enter more singing contests, her father encouraged her to be a teacher, which was a common job for Cuban women. Cruz gave teaching a try by enrolling in the National Teachers’ College, but soon dropped out because her live and radio performances were gaining publicity. Combining her own ambitions with her father’s wish for her, she enrolled in Havana’s National Conservatory for Music, where one of her professors convinced her to pursue a full-time singing career.

Cruz’s first recordings were made in 1948. Her singing career started its upward journey to stardom in 1950, when she began singing with celebrated Cuban orchestra Sonora Matancera. She helped propel the group, and Latin music in general, to new heights. Cruz became a U.S. citizen in 1961, and Fidel Castro barred her from returning to Cuba. She remained relatively unknown in the U.S., until she joined the Tito Puente Orchestra in the mid 1960s, where she gained exposure to a wide audience. She continued to perform and record albums throughout the 1970s and 1980s, and beyond. She made more than 75 records during that time and won several Grammys and Latin Grammys. She appeared in several movies, earned a star on Hollywood’s Walk of Fame, and was awarded the American National Medal of the Arts by the National Endowment of the Arts.

Celia Cruz died on July 16, 2003, in New Jersey, at the age of 77 following a battle with brain cancer. On October 13, 2015, Celia, a drama series inspired by the legendary singer’s life, debuted on Telemundo. Cruz is remembered as one of the 20th century’s most beloved and popular Latin musicians.