Lorna Simpson is a multimedia artist who explores race, gender and African-American identity in her powerful works.

“I focus on details, either of the body, or of objects that represent gender, sexuality, and other themes.” -Lorna Simpson 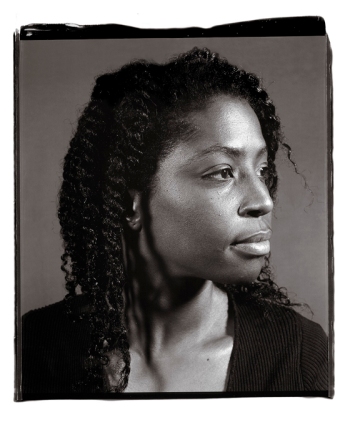 Lorna Simpson was born in 1960 in Brooklyn, New York. She is a multimedia artist best known for photography and video. Simpson explores race, gender and African-American identity in her powerful works. Simply put, she is one of the most eminent African-American artists working today.

Simpson came of age in the 1980s, a generation after Civil Rights and Black Power movements marked by the emergence of identity politics and multiculturalism. Though she began as a documentary photographer, Simpson is best known for her conceptual pairings of text fragments and studio photographs of anonymous African-American women draped in white shifts dresses. These cropped black-and-white photographs, anchored with obliquely disturbing text, often hint at discrimination and violence.

Simpson also creates photography silk screens on felt panels, installations, videos, and drawings. Though her practice has broadened to include still life and landscape, race and gender remain touchstones for her work. Recently, Simpson has taken up investigations of race and glamour in her photographs, featuring African-American models in classic Hollywood poses. Simpson was the first African-American woman to show in the Venice Biennale (in 1993) and to have a solo exhibition in the Projects series of the Museum of Modern Art. She enjoyed a mid-career retrospective at the Whitney Museum of American Art in 2007.